So... a friend of mine snagged a job that puts her on the road for sometimes weeks on end. She went to go rehome her Bearded Dragon girlie that she raised from a baby. I offered to give her a long-term/forever home so she knows where her baby is.

Her name is Draco. She's 3 years old and a doll. I petsat her for a week a bit ago and was pretty sad when she went home. I lost my tortoise few months back and I really missed having a reptile in the house. (lost as in he passed away)

It's sad this community is pretty dead, are there any other reptile communities on LJ that are a bit more active?

Here's a pic I snapped of her when I was petsitting her before. 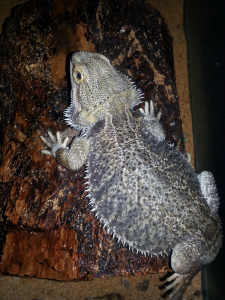 About a month ago I rescued a baby snake, from a single parent and young child. Parent bought the snake about 2-3 months ago. Snake was mishandled, and a bit snappy with the kid; kid lost interest with the snake as well. She was last fed by the parent the night I picked it up. Its a itty bitty amel. I tried to feed her about a week and a half ago, giving her time to settle in, left the pinkie in over night and she didn't touch it. Trying again tonight, and will also leave it in over night again. How long should I wait before I try again if she doesn't eat it? She has shed in the month that I have had her, pottyed an drank, and is active.

It's not my first corn snake, and I know they are well know for their voracious appetites. I have an older corn, had him for almost 10 years now, and he has never refused to eat for me.

My name is Ramses and I am a bluetongue skink. I am three years old. And like my profile says I was named for the pharaoh Ramses the Great. I am a working herp {that is to say that my mom has cerebral palsy and I help to treat it by waking her muscles up}. This is my first time on Live Journal and I'm still figuring the place out. Been spending a few hours with Cleopatra and Mommy L and watching "The Fairy Dance" on mini-tv {for those of you that don't know mini-tv is Mommy L's laptop computer heehee}. :)

My leopard gecko has been sick, not eating. She does this not eating thing periodically, so I was keeping an eye on her, but she's gotten worse, and her tail is skinnier. I'm feeding her with a dropper. Anyone else got ideas? She's intent on biting me, which ends up being funny, if I weren't so worried about her.

look what showed up yesterday morning!

Hey, first post here! So, I got my bearded dragon in May, and he was just a little thing at the time. I'm guessing he's about fiveish months old?

Last night, I fed him some crickets. About half an hour later, his beard/underside turned black. I was a little concerned, since he wasn't being bothered either by me or my cats (and he tends not to turn black when my cats are peering into his tank either, so...)

Eventually I put him to bed, with his underside still being quite dark. This morning when I turned back on his lights, he was still pretty black. It's now been around five hours or so since then, and though he's a little bit ligheter than he has been, he's still pretty dark.

Does anyone know what might be going on? D= I'm pretty worried about the little dude.

Further to my previous post re. King's Reptiles in Camden High Street, London

I learned today that Simon, who I think was the actual owner of the business, died a few days ago. This has accelerated the timetable for closing the shop, and their last day of trading will be Tuesday next week. They're selling off tanks, vivariums, and accessories, prices seem to be about 2/3rds normal, I'd be surprised if they have much in the way of food next week.

This is very bad news for herpers across London but there's apparently a possibility that someone with experience in this field may buy the business and re-open at a later date; it's far from a done deal, and I wouldn't recommend counting on it. In any case the shop will be closed for the foreseeable future. I'm in the area at least once a week, and will post again if there are any developments.

Bad news for resident of London (UK) - King's Reptiles in Camden High Street will be closing at the end of September (probably September 28th) due to the ill-health of one of the owners. It's a real shame because they were one of the best breeders of snakes and other reptiles, and consistently good on things like frozen mice etc.

If you've been a customer you might want to stock up before they close, and check out alternative suppliers. Also, it's possible that they will be clearing stock before they close; it may be worth checking if they've still got the things you want, or if there are any special offers, as the end of next month approaches.

I'm an experienced herp owner and have had a juvenile savannah monitor for two months. I've exhausted all the good care sheets and bought and read the recommended book and he is doing great! I was just wondering if any long-term owners on here had any crucial advice for me regarding anything at all - diet, "taming," handling, etc. I would just like to hear from people who have raised one from a baby to an adult. Again, I have done extensive research, just want tips :) Currently, my little guy is about 4 months old.
Collapse